Nadine Gordimer’s Racism, and Wikipedia’s Attempt to Cover It Up

Nadine Gordimer’s Racism, and Wikipedia’s Attempt to Cover It Up 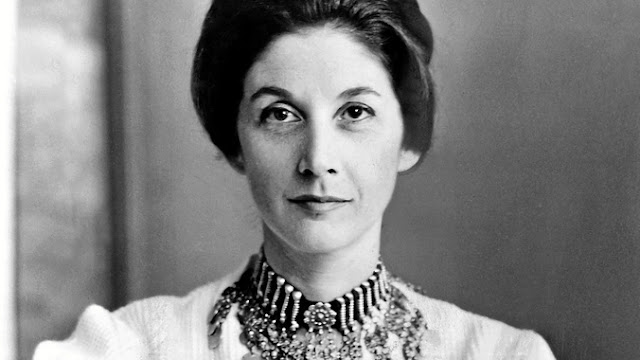 Nadine Gordimer: Portrait of the Racist as “Anti-Racist”

[Previously, by this writer: “Wikipedia and Race.”]

Nadine Gordimer (1923-2014) leveraged a life devoted to promoting murderous racism into worldwide acclaim, wealth, and awards, including the Nobel Prize for Literature. Her trick: redefining racism as “anti-racism,” or in her case, “anti-apartheid.”

The following passages on Gordimer’s anti-Afrikaner (anti-white) racism are from the talk page accompanying her entry at The Pretend Encyclopedia, aka Wikipedia.

“The [De Beer = Afrikaans] child will sink, she will drown if she lets go of her mother, yet her clinging is flirtatious, she tries to make him look at her so that she may at once hide her head against the mother’s thigh. She’s a beautiful child as their children often are — where do they get them from? — and she’ll grow up — what do they do to them? — the same sort of vacant turnip as the mother ... To go into those women must be like using the fleshy succulent plants men in the Foreign Legion have to resort to.”

Laurie Quilter is one of the many racist Wikithugs who enforce the party line, and who has for years devoted herself to ensuring that the entry on Gordimer is as dishonest as possible. The passage in question was not from an “open letter” to Gordimer, it was Gordimer’s words, and it was not in a satirical vein, any more than the comment from 41.151.70.149 was.

The passage was dialogue from a Gordimer novel, The Conservationist, but the character who made the dehumanizingly anti-Afrikaner remarks was simply a ventriloquist’s dummy for Gordimer’s own racism.

It has become fashionable, in recent years, to claim that remarks that have since been denounced were “satirical.” In such contexts, the word “satirical” makes no sense. Indeed, a racial socialist like Laurie Quilter has no sense whatsoever of the concept of “satire,” and I’m losing my own sense of it. Quilter simply made up her lie about an “open letter” out of whole cloth. The anonymous commenter had provided the link to Gordimer’s racist novel, and Quilter knew she was lying. The stupidity of her lie suggests that Quilter is one of those pathological liars who lie all the time, in matters big and small, no matter how obvious the lie. (I also happen to unfortunately be familiar with Laurie Quilter’s penchant for lying, not to mention her racism.)

Wikipedia/TPE has a history of sending truthful edits of entries down the memory hole. It used to be that one could learn much of the censored truth, by reading the “talk/discussion” pages that accompany each article. However, during the past couple of years, its racial socialist enforcers have become so rabid that they even send inconvenient truths from the talk pages, down the memory hole. And those truths are lost forever, as they do not show up in the talk pages’ “revision history”—virtually nothing does. Check out this revision history of the talk page for Gordimer, for instance, which was archived by … Laurie Quilter.